Stock Photos
The northern lapwing (Vanellus vanellus), also known as the peewit or pewit, tuit or tew-it, green plover, or (in Britain and Ireland) pyewipe or just lapwing, is a bird in the lapwing family. It is common through temperate Eurosiberia.

The northern lapwing is a 28–33 cm (11–13 in) long bird with a 67–87 cm (26–34 in) wingspan and a body mass of 128–330 g (4.5–11.6 oz). It has rounded wings and a crest. It is also the shortest-legged of the lapwings. It is mainly black and white, but the back is tinted green. The male has a long crest and a black crown, throat and breast contrasting with an otherwise white face. Females and young birds have shorter crests, and have less strongly marked heads, but plumages are otherwise quite similar. 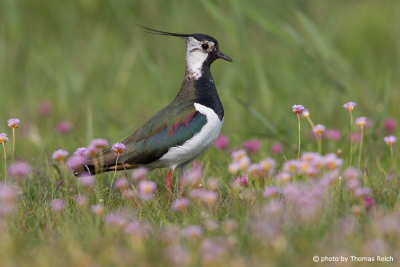 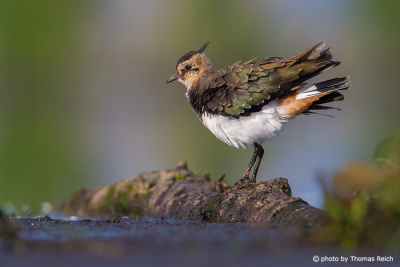 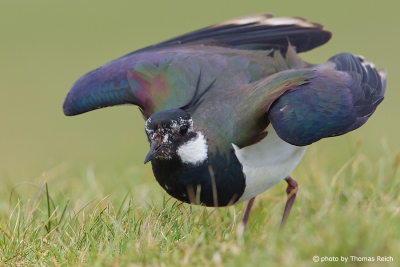 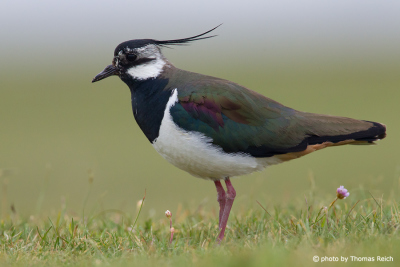 This is a vocal bird in the breeding season, with constant calling as the crazed tumbling display flight is performed by the male. The typical contact call is a loud, shrill "pee-wit" from which they get their other name of peewit. Displaying males usually make a wheezy "pee-wit, wit wit, eeze wit" during their display flight, these birds also make squeaking or mewing sounds.

It is highly migratory over most of its extensive range, wintering further south as far as North Africa, northern India, Pakistan, and parts of China. It migrates mainly by day, often in large flocks. Lowland breeders in westernmost areas of Europe are resident. It occasionally is a vagrant to North America, especially after storms, as in the Canadian sightings after storms in December 1927 and in January 1966.

It feeds primarily on insects and other small invertebrates. This species often feeds in mixed flocks with golden plovers and black-headed gulls, the latter often robbing the two plovers, but providing a degree of protection against predators. Like the golden plovers, this species prefers to feed at night when there is moonlight.

It is a wader that breeds on cultivated land and other short vegetation habitats. 3–4 eggs are laid in a ground scrape. The nest and young are defended noisily and aggressively against all intruders, up to and including horses and cattle. 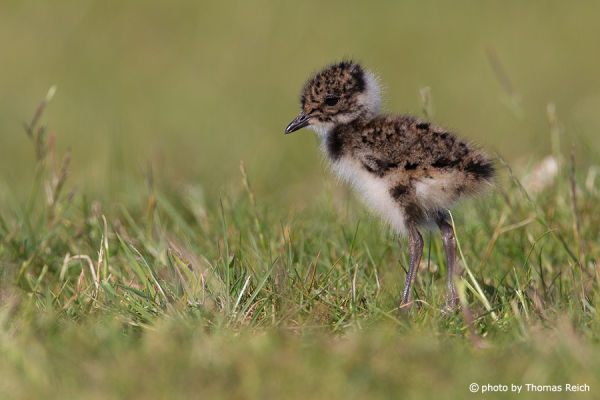 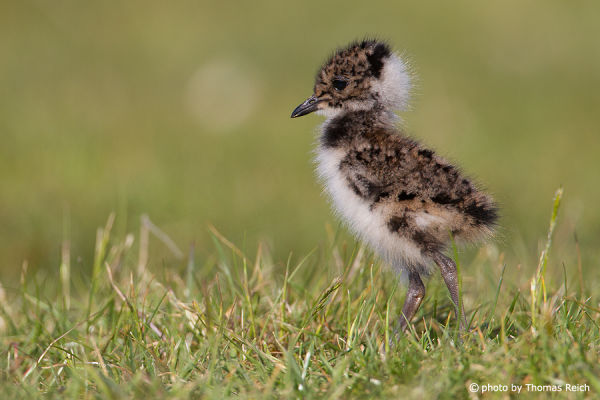 "Plover's eggs" were an expensive delicacy in Victorian Europe, mentioned in Evelyn Waugh's Brideshead Revisited, about aristocratic British society in 1920–40. In the Netherlands, there is a cultural-historical competition to find the first peewit egg of the year (het eerste kievietsei). It is especially popular in the province Friesland, but there are also regional competitions. Gathering peewit eggs is prohibited by the European Union, but Friesland was granted an exception for cultural-historical reasons. The Frisian exception was removed in 2005 by a court, which determined that the Frisian executive councillors had not properly followed procedure. As of 2006 looking for peewit eggs is permitted between 1 March and 9 April, though harvesting the eggs is now forbidden. In 2008 the first egg was found on 3 March, in Eemnes, Utrecht, and the first egg of 2009 was found on 8 March in Krabbendijke. Over the last century, the first peewit egg has been found earlier and earlier in the year. This is ascribed to both increased use of fertiliser and climate change, causing the growth of grass needed for egg laying to occur earlier.

This text is based on the article Northern lapwing from the free encyclopedia Wikipedia and is licensed under the Creative Commons CC-BY-SA 3.0 Unported (short version). A list of the authors is available on Wikipedia.