Stock Photos
The common redshank or simply redshank (Tringa totanus) is a Eurasian wader in the large family Scolopacidae. The genus name Tringa is the New Latin name given to the green sandpiper by Aldrovandus in 1599 based on Ancient Greek trungas, a thrush-sized, white-rumped, tail-bobbing wading bird mentioned by Aristotle. The specific totanus is from Tótano, the Italian name for this bird.

Common redshanks in breeding plumage are a marbled brown color, slightly lighter below. In winter plumage they become somewhat lighter-toned and less patterned, being rather plain greyish-brown above and whitish below. They have red legs and a black-tipped red bill, and show white up the back and on the wings in flight.

The spotted redshank (T. erythropus), which breeds in the Arctic, has a longer bill and legs; it is almost entirely black in breeding plumage and very pale in winter. It is not a particularly close relative of the common redshank, but rather belongs to a high-latitude lineage of largish shanks. T. totanus on the other hand is closely related to the marsh sandpiper (T. stagnatilis), and closer still to the small wood sandpiper (T. glareola). The ancestors of the latter and the common redshank seem to have diverged around the Miocene-Pliocene boundary, about 5–6 million years ago. These three subarctic- to temperate-region species form a group of smallish shanks with have red or yellowish legs, and in breeding plumage are generally a subdued light brown above with some darker mottling, and have somewhat diffuse small brownish spots on the breast and neck. 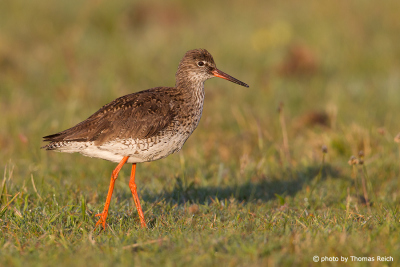 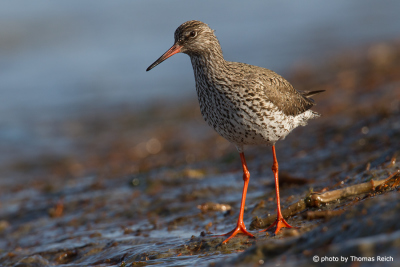 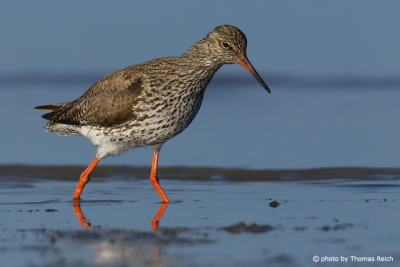 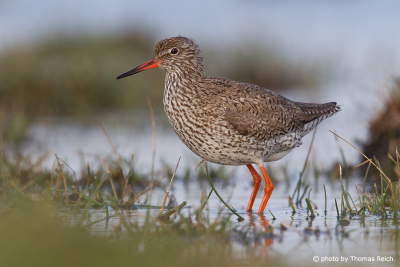 They are wary and noisy birds which will alert everything else with their loud piping call.

Several subspecies have been identified. These include:

It is widely distributed and quite plentiful in some regions, and thus not considered a threatened species by the IUCN.

Redshanks will nest in any wetland, from damp meadows to saltmarsh, often at high densities. They lay 3–5 eggs.

This text is based on the article Common redshank from the free encyclopedia Wikipedia and is licensed under the Creative Commons CC-BY-SA 3.0 Unported (short version). A list of the authors is available on Wikipedia.