Stock Photos
The common snipe (Gallinago gallinago) is a small, stocky wader native to the Old World. The scientific name gallinago is New Latin for a woodcock or snipe from Latin gallina, "hen" and the suffix -ago, "resembling".

It is the most widespread of several similar snipes. It most closely resembles the Wilson's snipe (G. delicata) of North America, which was until recently considered to be a subspecies — G. g. delicata — of common snipe. They differ in the number of tail feathers, with seven pairs in G. gallinago and eight pairs in G. delicata; the North American species also has a slightly thinner white trailing edge to the wings (the white is mostly on the tips of the secondaries). Both species breed in the Aleutian Islands. It is also very similar to the pin-tailed snipe (G. stenura) and Swinhoe's snipe (G. megala) of eastern Asia; identification of these species there is complex.

There are two subspecies of common snipe, G. g. faeroeensis in Iceland, the Faroes, Shetland and Orkney (wintering in Britain and Ireland), and G. g. gallinago in the rest of the Old World. The faeroeensis normally is more richly toned on the breast, its upperparts and the head than the gallinago.

It is a well camouflaged bird, it is usually shy and conceals itself close to ground vegetation and flushes only when approached closely. When flushed, they utter a sharp note that sounds like scape, scape and fly off in a series of aerial zig-zags to confuse predators. 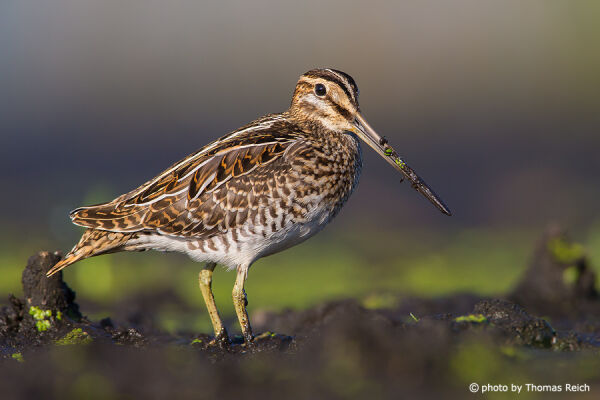 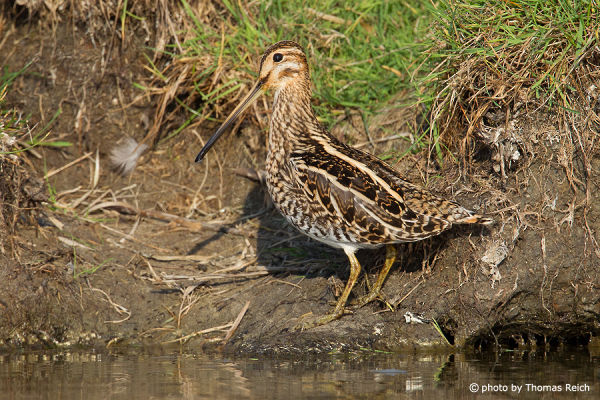 The male performs "winnowing" display during courtship, flying high in circles and then taking shallow dives to produce a "drumming" sound by vibrating its tail feathers. This sound has been compared by others to the bleating of a sheep or goat; hence in many languages the snipe is known by names signifying “flying goat,” “heaven's ram,” as in Scotland by “heather-bleater” and in Finnish the name taivaanvuohi, "sky goat".

Philip Manson-Bahr is credited with unravelling the mystery of how the snipe creates that unusual breathy sound which is unlike other birdsong. He worked out that the sound was created by placing out two tail feathers at 90 degrees to the direction of flight. When diving these feathers create this unusual sound. He demonstrated this in front of the British Ornithologists Union by inserting two snipe feathers into a cork which he then whirled around his head on a string.

The breeding habitat is marshes, bogs, tundra and wet meadows throughout the Palearctic.In the north, the distribution limit extends from Iceland over the north of the British Isles and northern Fennoscandia , where it occurs at around 70 ° N, as well as through European Russia and Siberia . Here it is mostly on the northern edge of the Taiga zone at 71 ° N, but reaches 74 ° N on the east coast of the Taymyr Peninsula. In the east it extends to the Anadyr, Kamchatka, the Bering Island and the Kuril Islands, The southern boundary of the distribution area in Europe runs through northern Portugal, central France, northern Italy, Bulgaria and the Ukraine, with populations in the west being only very scattered. In Asia, the distribution extends south to northern Turkestan, locally to Afghanistan and the Middle East, through the Altai and further to Manchuria and Ussuri. It is migratory, with European birds wintering in southern and western Europe and Africa (south to the Equator), and Asian migrants moving to tropical southern Asia. The North American Wilson's snipe was previously considered the same species, and is listed as such in older field guides. 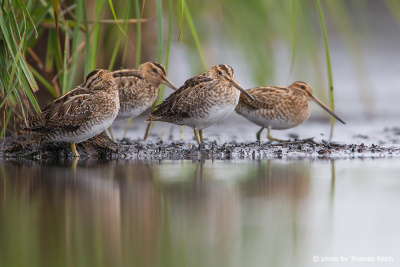 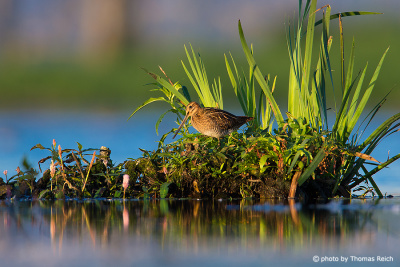 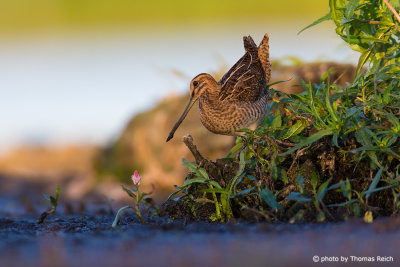 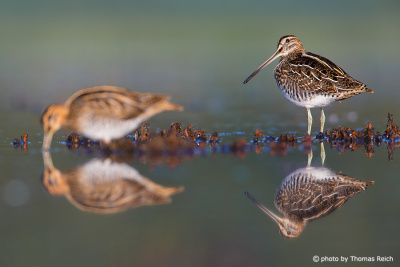 They forage in soft mud, probing or picking up food by sight. They mainly eat insects and earthworms, also some plant material. 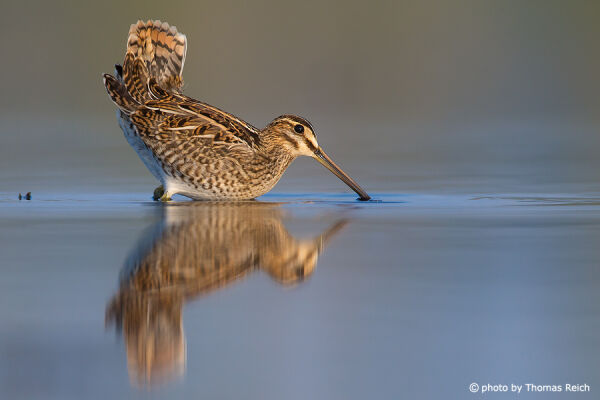 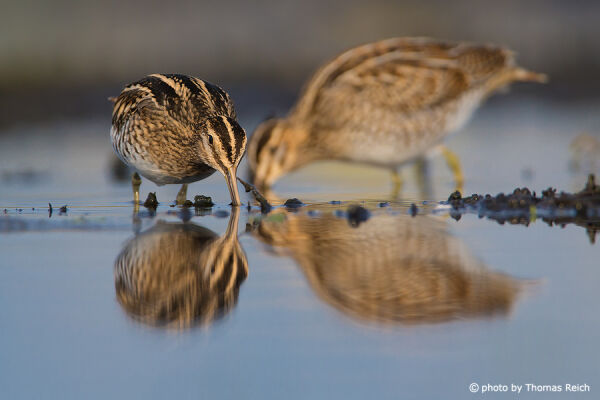 Wing shape does not differ between sedentary and migratory common snipe, suggesting that social selection influences wing shape given this species aerial displays during courtship.

Common snipe nest in a well-hidden location on the ground, laying four eggs of a dark olive colour, blotched and spotted with rich brown, which are incubated by the female for 18–21 days. The freshly hatched young are covered in dark maroon down, variegated with black, white and buff. The young are cared for by both parents, each parent looking after half the brood, with fledging in 10–20 days.

This text is based on the article Common snipe from the free encyclopedia Wikipedia and is licensed under the Creative Commons CC-BY-SA 3.0 Unported (short version). A list of the authors is available on Wikipedia.