This oystercatcher is the national bird of the Faroe Islands.

The oystercatcher is one of the largest waders in the region. It is 40–45 cm (16–18 in) long, the bill accounting for 8–9 cm (3–3 1⁄2 in), and has a wingspan of 80–85 cm (31–33 in). They are obvious and noisy plover-like birds, with black and white plumage, red legs and strong broad red bills used for smashing or prising open molluscs such as mussels or for finding earthworms. Despite its name, oysters do not form a large part of its diet. The bird still lives up to its name, as few if any other wading birds are capable of opening oysters at all.

This oystercatcher is unmistakable in flight, with white patches on the wings and tail, otherwise black upperparts, and white underparts. Young birds are more brown, have a white neck collar and a duller bill. The call is a distinctive loud piping.

There are three subspecies: the nominate ostralegus found in Europe and the coasts of eastern Europe, longipes from Central Asia and Russia, and osculans found from Kamchatka in the Russian Far East and northern parts of China. The extinct Canarian oystercatcher from the Canary Islands may have represented a fourth subspecies, meadewoldi. 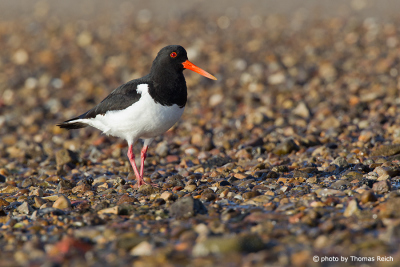 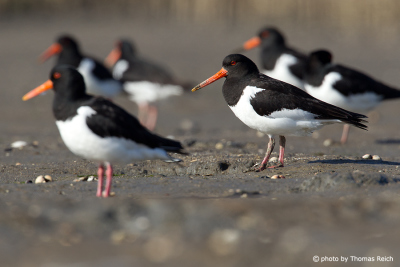 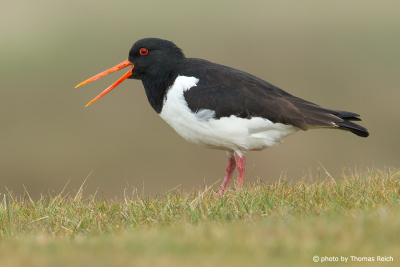 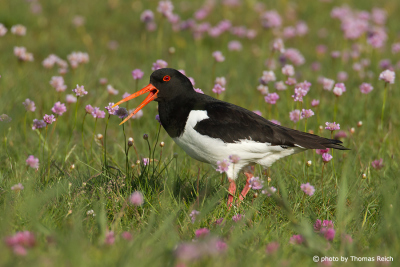 The oystercatcher is a migratory species over most of its range. The European population breeds mainly in northern Europe, but in winter the birds can be found in north Africa and southern parts of Europe. Although the species is present all year in Ireland, Great Britain and the adjacent European coasts, there is still migratory movement: the large flocks that are found in the estuaries of south-west England in winter mainly breed in northern England or Scotland. Similar movements are shown by the Asian populations. The birds are highly gregarious outside the breeding season.

Because of its large numbers and readily identified behaviour, the oystercatcher is an important indicator species for the health of the ecosystems where it congregates. Extensive long-term studies have been carried out on its foraging behaviour, in northern Germany, in the Netherlands and particularly on the River Exe estuary in south-west England. These studies form an important part of the foundation for the modern discipline of behavioural ecology.

The bill shape varies; oystercatchers with broad bill tips open molluscs by prising them apart or hammering through the shell, whereas pointed-bill birds dig up worms. Much of this is due to the wear resulting from feeding on the prey. Individual birds specialise in one technique or the other which they learn from their parents. 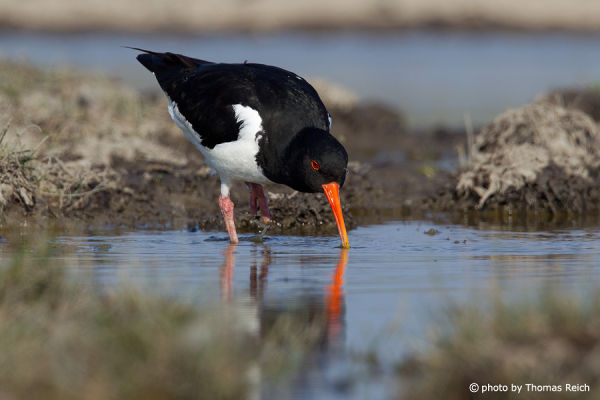 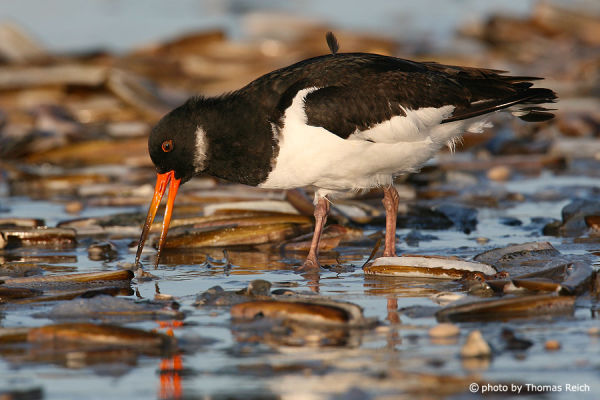 The nest is a bare scrape on pebbles, on the coast or on inland gravelly islands. 2–4 eggs are laid. Both eggs and chicks are highly cryptic. 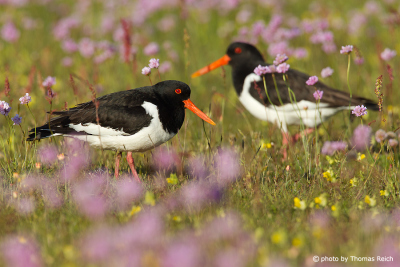 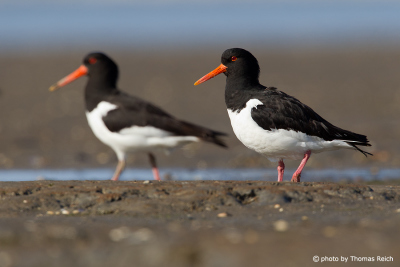 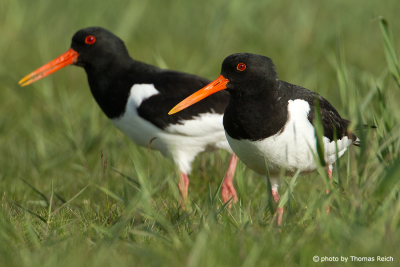 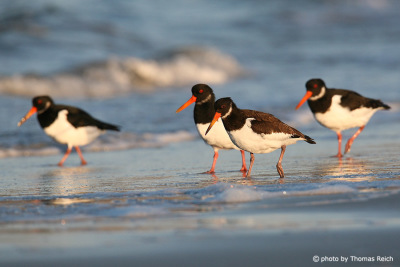 This text is based on the article Eurasian oystercatcher from the free encyclopedia Wikipedia and is licensed under the Creative Commons CC-BY-SA 3.0 Unported (short version). A list of the authors is available on Wikipedia.