Stock Photos
The song thrush (Turdus philomelos) is a thrush that breeds across the West Palearctic. It has brown upper-parts and black-spotted cream or buff underparts and has three recognised subspecies. Its distinctive song, which has repeated musical phrases, has frequently been referred to in poetry.

The song thrush breeds in forests, gardens and parks, and is partially migratory with many birds wintering in southern Europe, North Africa and the Middle East; it has also been introduced into New Zealand and Australia. Although it is not threatened globally, there have been serious population declines in parts of Europe, possibly due to changes in farming practices.

The song thrush builds a neat mud-lined cup nest in a bush or tree and lays four to five dark-spotted blue eggs. It is omnivorous and has the habit of using a favourite stone as an "anvil" on which to break open the shells of snails. Like other perching birds (passerines), it is affected by external and internal parasites and is vulnerable to predation by cats and birds of prey.

The song thrush (as represented by the nominate subspecies T. p. philomelos) is 20 to 23.5 centimetres (8 to 9.25 in) in length and weighs 50–107 grammes (1.8 to 3.8 oz). The sexes are similar, with plain brown backs and neatly black-spotted cream or yellow-buff underparts, becoming paler on the belly. The underwing is warm yellow, the bill is yellowish and the legs and feet are pink. The upperparts of this species become colder in tone from west to east across the breeding range from Sweden to Siberia. The juvenile resembles the adult, but has buff or orange streaks on the back and wing coverts. 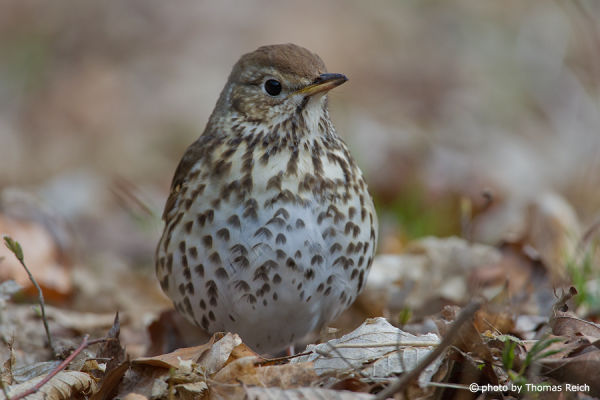 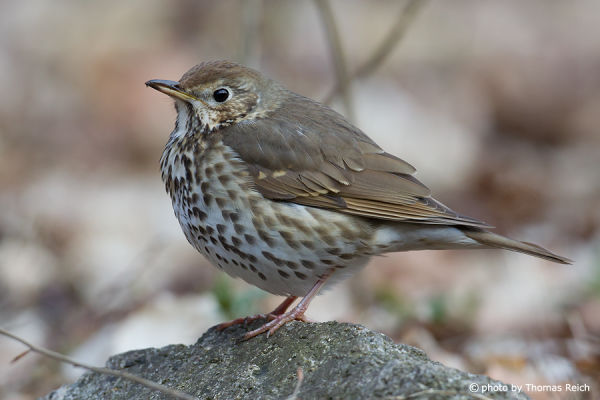 The most similar European thrush species is the redwing (T. iliacus), but that bird has a strong white supercilium, red flanks, and shows a red underwing in flight. The mistle thrush (T. viscivorus) is much larger and has white tail corners, and the Chinese thrush (T. mupinensis), although much more similar in plumage, has black face markings and does not overlap in range.

The song thrush has a short, sharp tsip call, replaced on migration by a thin high seep, similar to the redwing's call but shorter. The alarm call is a chook-chook becoming shorter and more strident with increasing danger. The male's song, given from trees, rooftops or other elevated perches, is a loud clear run of musical phrases, repeated two to four times, filip filip filip codidio codidio quitquiquit tittit tittit tereret tereret tereret, and interspersed with grating notes and mimicry. It is given mainly from February to June by the Outer Hebridean race, but from November to July by the more widespread subspecies.

For its weight, this species has one of the loudest bird calls. An individual male may have a repertoire of more than 100 phrases, many copied from its parents and neighbouring birds. Mimicry may include the imitation of man-made items like telephones, and the song thrush will also repeat the calls of captive birds, including exotics such as the white-faced whistling duck.

The song thrush breeds in most of Europe (although not in the greater part of Iberia, lowland Italy or southern Greece), and across the Ukraine and Russia almost to Lake Baikal. It reaches to 75°N in Norway, but only to about 60°N in Siberia. Birds from Scandinavia, Eastern Europe and Russia winter around the Mediterranean, North Africa and the Middle East, but only some of the birds in the milder west of the breeding range leave their breeding areas.

In Great Britain song thrushes are commonly found where there are trees and bushes. Such areas include parks, gardens, coniferous and deciduous woodland and hedgerows.

Birds of the nominate subspecies were introduced to New Zealand and Australia by acclimatisation societies between 1860 and 1880, apparently for purely sentimental reasons. In New Zealand, where it was introduced on both the main islands, the song thrush quickly established itself and spread to surrounding islands such as the Kermadecs, Chatham and Auckland Islands. Although it is common and widespread in New Zealand, in Australia only a small population survives around Melbourne. In New Zealand, there appears to be a limited detrimental effect on some invertebrates due to predation by introduced bird species, and the song thrush also damages commercial fruit crops in that country. As an introduced species it has no legal protection in New Zealand, and can be killed at any time.

The song thrush typically nests in forest with good undergrowth and nearby more open areas, and in western Europe also uses gardens and parks. It breeds up to the tree-line, reaching 2,200 metres (7,250 ft) in Switzerland. The island subspecies T. p. hebridensis breeds in more open country, including heathland, and in the east of the song thrush's Eurasian range, the nominate subspecies is restricted to the edge of the dense conifer forests.

In intensively farmed areas where agricultural practices appear to have made cropped land unsuitable, gardens are an important breeding habitat. In one English study, only 3.5% of territories were found in farmland, whereas gardens held 71.5% of the territories, despite that habitat making up only 2% of the total area. The remaining nests were in woodlands (1% of total area).

The winter habitat is similar to that used for breeding, except that high ground and other exposed localities are avoided; however, the island subspecies T. p. hebridensis will frequent the seashore in winter.

The song thrush is omnivorous, eating a wide range of invertebrates, especially earthworms and snails, as well as soft fruit and berries. Like its relative, the blackbird, the song thrush finds animal prey by sight, has a run-and-stop hunting technique on open ground, and will rummage through leaf-litter seeking potential food items.

Land snails are an especially important food item when drought or hard weather makes it hard to find other food. The thrush often uses a favorite stone as an "anvil" on which to break the shell of the snail before extracting the soft body and invariably wiping it on the ground before consumption. Young birds initially flick objects and attempt to play with them until they learn to use anvils as tools to smash snails. The nestlings are mainly fed on animal food such as worms, slugs, snails and insect larvae.

The grove Snail (Cepaea nemoralis) is regularly eaten by the song thrush, and its polymorphic shell patterns have been suggested as evolutionary responses to reduce predation; however, song thrushes may not be the only selective force involved.

The female song thrush builds a neat cup-shaped nest lined with mud and dry grass in a bush, tree or creeper, or, in the case of the Hebridean subspecies, on the ground. She lays four or five bright glossy blue eggs which are lightly spotted with black or purple; they are typically 2.7 cm × 2.0 cm (1.06 in × 0.79 in) size and weigh 6.0 g (0.21 oz), of which 6% is shell. The female incubates the eggs alone for 10–17 days, and after hatching a similar time elapses until the young fledge. Two or three broods in a year is normal, although only one may be raised in the north of the range. On average, 54.6% of British juveniles survive the first year of life, and the adult annual survival rate is 62.2%. The typical lifespan is three years, but the maximum recorded age is 10 years 8 months. The song thrush is occasionally a host of parasitic cuckoos, such as the common cuckoo, but this is very rare because the thrush recognizes the cuckoo's non-mimetic eggs. However, the song thrush does not demonstrate the same aggression toward the adult cuckoo that is shown by the blackbird. The introduced birds in New Zealand, where the cuckoo does not occur, have, over the past 130 years, retained the ability to recognize and reject non-mimetic eggs.

This text is based on the article Song thrush from the free encyclopedia Wikipedia and is licensed under the Creative Commons CC-BY-SA 3.0 Unported (short version). A list of the authors is available on Wikipedia.