Stock Photos
Sardinia (/sɑːrˈdɪniə/ sar-DIN-ee-ə; Italian: Sardegna [sarˈdeɲɲa]; Sardinian: Sardigna [saɾˈdiɲɲa] or Sardìnnia [saɾˈdinja]; Sassarese: Sardhigna; Gallurese: Saldigna; Algherese: Sardenya; Tabarchino: Sardegna) is the second-largest island in the Mediterranean Sea, after Sicily, and one of the 20 regions of Italy. It is located west of the Italian Peninsula, north of Tunisia and immediately south of the French island of Corsica.

It is one of the five Italian regions that have been granted some degree of domestic autonomy by special statute. Its official name is Regione Autonoma della Sardegna (Sardinian: Regione Autònoma de Sardigna; English: "Autonomous Region of Sardinia"). It is divided into four provinces and a metropolitan city. The capital of the region of Sardinia — and its largest city — is Cagliari. Sardinia's indigenous language and the other minority languages spoken on the island (Sassarese, Gallurese, Algherese Catalan and Ligurian Tabarchino) are officially recognized by the regional law as having "equal dignity" with Italian. 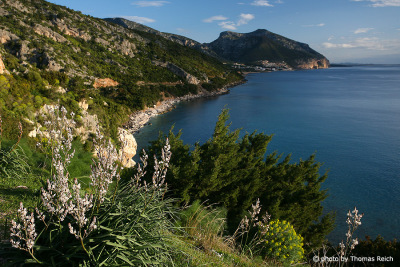 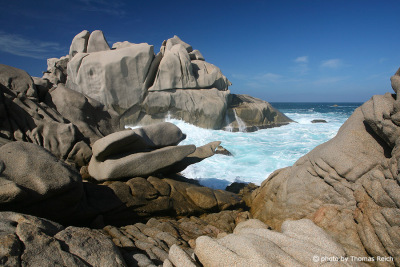 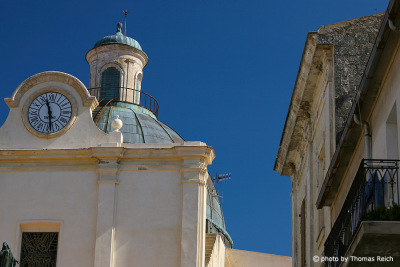 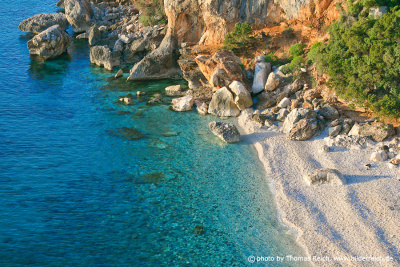 The nearest land masses are (clockwise from north) the island of Corsica, the Italian Peninsula, Sicily, Tunisia, the Balearic Islands, and Provence. The Tyrrhenian Sea portion of the Mediterranean Sea is directly to the east of Sardinia between the Sardinian east coast and the west coast of the Italian mainland peninsula. The Strait of Bonifacio is directly north of Sardinia and separates Sardinia from the French island of Corsica.

The coasts of Sardinia are 1,849 km (1,149 mi) long. They are generally high and rocky, with long, relatively straight stretches of coastline, many outstanding headlands, a few wide, deep bays, rias, many inlets and with various smaller islands off the coast.

The island has an ancient geoformation and, unlike Sicily and mainland Italy, is not earthquake-prone. Its rocks date in fact from the Palaeozoic Era (up to 500 million years old). Due to long erosion processes, the island's highlands, formed of granite, schist, trachyte, basalt (called jaras or gollei), sandstone and dolomite limestone (called tonneri or "heels"), average at between 300 to 1,000 m (984 to 3,281 ft). The highest peak is Punta La Marmora (Perdas Carpìas in Sardinian language) (1,834 m (6,017 ft)), part of the Gennargentu Ranges in the centre of the island. Other mountain chains are Monte Limbara (1,362 m (4,469 ft)) in the northeast, the Chain of Marghine and Goceano (1,259 m (4,131 ft)) running crosswise for 40 km (25 mi) towards the north, the Monte Albo (1,057 m (3,468 ft)), the Sette Fratelli Range in the southeast, and the Sulcis Mountains and the Monte Linas (1,236 m (4,055 ft)). The island's ranges and plateaux are separated by wide alluvial valleys and flatlands, the main ones being the Campidano in the southwest between Oristano and Cagliari and the Nurra in the northwest.

Sardinia has few major rivers, the largest being the Tirso, 151 km (94 mi) long, which flows into the Sea of Sardinia, the Coghinas (115 km (71 mi)) and the Flumendosa (127 km (79 mi)). There are 54 artificial lakes and dams that supply water and electricity. The main ones are Lake Omodeo and Lake Coghinas. The only natural freshwater lake is Lago di Baratz. A number of large, shallow, salt-water lagoons and pools are located along the coastline.

This text is based on the article Sardinia from the free encyclopedia Wikipedia and is licensed under the Creative Commons CC-BY-SA 3.0 Unported (short version). A list of the authors is available on Wikipedia.