Stock Photos
Seychelles, officially the Republic of Seychelles (French: République des Seychelles; Creole: La Repiblik Sesel), is an archipelagic island country in the Indian Ocean at the eastern edge of the Somali Sea. The country consists of 115 islands. Its capital and largest city, Victoria, lies 1,500 kilometres (932 mi) east of mainland Africa. Other nearby island countries and territories include the Comoros, Madagascar, Mauritius, and the French overseas regions of Mayotte and Réunion to the south; as well as Maldives and the Chagos Archipelago (administered by the United Kingdom as the British Indian Ocean Territory) to the east. With a population of roughly 98,462, it has the smallest population of any sovereign African country. 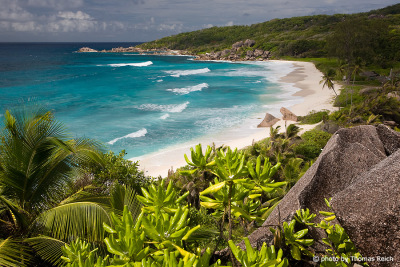 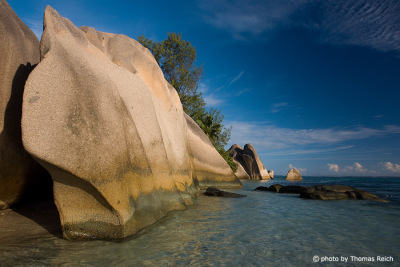 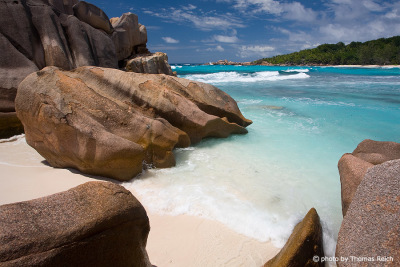 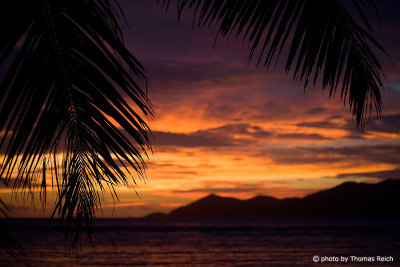 Seychelles was uninhabited prior to being encountered by Europeans in the 16th century. It faced competing French and British interests until coming under full British control in the late 18th century. Since proclaiming independence from the United Kingdom in 1976, Seychelles has developed from a largely agricultural society to a market-based diversified economy, characterized by rapidly rising service, public sector, and tourism activities. From 1976 until 2015, nominal GDP grew nearly sevenfold, and purchasing power parity increased nearly sixteenfold. Since the late 2010s, the government has taken steps to encourage foreign investment.

Today, Seychelles boasts the highest nominal per capita GDP of any African nation. It is the first African country with an HDI score exceeding 0.800, and therefore the only country in the continent with a very high Human Development Index. It is one of only two countries in Africa classified as a high-income economy by the World Bank, the other being Mauritius. Despite its relative prosperity, poverty remains widespread as the country has one of the highest levels of economic inequality in the world and markedly unequal wealth distribution, with the upper and ruling class commanding a vast proportion of the country's wealth.

Seychellois culture and society is an eclectic mix of French, British, and African influences, with more recent infusions of Chinese and Indian elements. The country is a member of the United Nations, the African Union, the Southern African Development Community, and the Commonwealth of Nations.
An island nation, Seychelles is located in the Somali Sea segment of the Indian Ocean, northeast of Madagascar and about 1,600 km (994 mi) east of Kenya. The Constitution of Seychelles lists 115 named islands and a further 7 reclaimed islands have been created subsequent to the publication of the Constitution. The majority of the islands are uninhabited, with many dedicated as nature reserves. Seychelles largest island Mahe is located at a distance of 835 mi (1,344 km), from Mogadishu, Somalia's capital over the Somali Sea.

A group of 44 islands (42 granitic and 2 coralline) occupy the shallow waters of the Seychelles Bank and are collectively referred to as the inner islands. They have a total area of 244 km2, accounting for 54% of the total land area of the Seychelles and 98% of the entire population.

The islands are divided into groups as follows.

There are two coral sand cays north of the granitics on the edge of the Seychelles Bank: Denis and Bird.

In addition to these 155 islands as per the Constitution of Seychelles there are 7 reclaimed islands: Ile Perseverance, Ile Aurore, Romainville, Eden Island, Eve, Ile du Port and Ile Soleil.

South Island, African Banks has been eroded by the sea. At St Joseph Atoll, Banc de Sable and Pelican Island have also eroded, while Grand Carcassaye and Petit Carcassaye have merged to form one island. There are also several unnamed islands at Aldabra, St Joseph Atoll and Cosmoledo. Pti Astove, though named, failed to make it into the Constitution for unknown reasons.
Seychelles is among the world's leading countries to protect lands for threatened species, allocating 42% of its territory for conservation. Like many fragile island ecosystems, Seychelles saw the loss of biodiversity when humans first settled in the area, including the disappearance of most of the giant tortoises from the granitic islands, the felling of coastal and mid-level forests, and the extinction of species such as the chestnut flanked white eye, the Seychelles parakeet, and the saltwater crocodile. However, extinctions were far fewer than on islands such as Mauritius or Hawaii, partly due to a shorter period of human occupation (since 1770). Seychelles today is known for success stories in protecting its flora and fauna. The rare Seychelles black parrot, the national bird of the country, is now protected.

The freshwater crab genus Seychellum is endemic to the granitic Seychelles, and a further 26 species of crabs and five species of hermit crabs live on the islands. The Aldabra giant tortoise now populates many of the islands of Seychelles; the Aldabra population is the largest remaining. These unique reptiles can be found even in captive herds. The granitic islands of Seychelles may support distinct species of Seychelles giant tortoises; the status of the different populations is currently unclear. Seychelles hosts some of the largest seabird colonies in the world, notably on the outer islands of Aldabra and Cosmoledo. In granitic Seychelles the largest colonies are on Aride Island including the world's largest numbers of two species. Sooty terns also breed on the islands. Other birds include Cattle egrets (Bubulcus ibis) and Fairy terns (Gygis alba). More than 1,000 species of fish have been recorded.

The granitic islands of Seychelles are home to about 75 endemic plant species, with a further 25 or so species in the Aldabra group. Particularly well known is the coco de mer, a species of palm that grows only on the islands of Praslin and neighbouring Curieuse. Sometimes nicknamed the "love nut" because the shape of its "double" coconut resembles buttocks, the coco-de-mer produces the world's heaviest seed. The jellyfish tree is to be found in only a few locations on Mahe. This strange and ancient plant in a genus of its own (Medusagyne) seems to reproduce only in cultivation and not in the wild. Other unique plant species include Wright's gardenia (Rothmannia annae) found only on Aride Island Special Reserve. There are several unique species of orchid on the islands.

Seychelles is home to two terrestrial ecoregions: Granitic Seychelles forests and Aldabra Island xeric scrub. The country had a 2019 Forest Landscape Integrity Index mean score of 10/10, ranking it first globally out of 172 countries.

This text is based on the article Seychelles from the free encyclopedia Wikipedia and is licensed under the Creative Commons CC-BY-SA 3.0 Unported (short version). A list of the authors is available on Wikipedia.